A Dan ‘Spider’ Shepherd thriller.  He is a great character, an old-fashioned gung-ho hero with knowledge of modern procedures and weapons.  This is his eleventh adventure.  It all revolves around the Bin Laden killing and a possible conspiracy involving the Brits.  Tortures might reveal secrets best kept secret so Spider is called in to intervene, but he too is in trouble.  This is a compelling read with the outcome uncertain right up until the last pages; great stuff.

Dan 'Spider' Shepherd is used to putting his life on the line - for his friends and for his job with MI5. So when one of his former apprentices is kidnapped in the badlands of Pakistan, Shepherd doesn't hesitate to join a rescue mission. But when the plan goes horribly wrong, Shepherd ends up in the hands of al-Qaeda terrorists. His SAS training is of little help as his captors beat and torture him. Shepherd's MI5 controller Charlotte Button is determined to get her man out of harm's way, but to do that she's going to have to break all the rules. Her only hope is to bring in America's finest - the elite SEALs who carried out Operation Neptune Spear - in a do-or-die operation to rescue the captives.

Stephen Leather is an ex-journalist who divides his time between the UK and Hong Kong and is adroit at dispensing high-adrenaline plotting in his thrillers, but never at the expense of remembering that his characters are human beings rather than Action Man dolls. In such fast-moving books as The Long Shot, Leather delivers lean thriller epics. Not much psychological nuance, but plenty of kinetic energy. His series hero is Dan ‘Spider’ Shepherd, a tough SAS trooper-turned-detective in an elite undercover squad, whose mix of police and army training ensures that he can be used in regular police investigations while still being hardwired for the strong-arm stuff. But it’s Shepherd’s pungently drawn personality that makes him such a memorable hero, as in White Lies, this latest Spider Shepherd thriller.

'Lots of gunfire, tactical talk and imaginative plotting. Let Spider draw you into his web, you won't regret it'

'As tough as British thrillers get ... gripping'

'A writer at the top of his game' 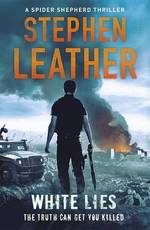 Stephen Leather was a journalist for more than ten years on newspapers such as The Times, the Daily Mail and the South China Morning Post in Hong Kong. Before that, he was employed as a biochemist for ICI, shovelled limestone in a quarry, worked as a baker, a petrol pump attendant, a barman, and worked for the Inland Revenue. He began writing full-time in 1992. His bestsellers have been translated into more than ten languages. He has also written for television shows such as London’s Burning, The Knock and the BBC’s Murder in Mind series.Photograph © ...