LoveReading View on The Undertaking

September 2014 Debut of the Month.

An exceptional and totally engrossing debut novel, viewing WWII from an unfamiliar perspective. We are introduced to an ordinary German family in extraordinary times; they make some perplexing and disturbing decisions, is this in order to prosper or survive? The understated and restrained writing style perfectly suits the complex subject matter, allowing you to become absorbed in the central characters lives. At the beginning, while the war is at a distance and triumph seems inevitable, you are kept quite deliberately detached from Katharina and Peter but as the full horror of war gets ever closer, you discover just how much the human soul can endure.
The author takes you on a journey, subtly and quietly introducing you to the Nazi party, where the family start to climb the career ladder of glamour and success. In the battle for Stalingrad, the writing is so simple yet stirring; hunger, loss, pain, cold, fear and ultimately survival all crying out from the page. Towards the end, the final feelings of guilt and the search for absolution (which were initially so conspicuously absent) are written with great insight and consideration. This is such a stimulating and thought provoking novel, you will be left questioning and wondering “what would I have done”? ~ Liz Robinson

A soldier fighting on the Russian front for the German Army desperate to escape the ‘stinking hell-hole’, Faber agrees to marry Katharina, whom he has never met, as it means he will get leave in Berlin to meet her. Remark-ably, they get on, and Faber’s honeymoon is extended when his father-in-law’s high-ranking Nazi friend Dr Weinart finds work for him rounding up the capital’s Jews for deportation. On his return, Faber finds the Russian front even more of a hell-hole, but he now has something to fight for after Katharina gives birth to their son.

'Brutal but brilliant... Full of heart-pounding suspense... Magee offers an insight both into the deprivation experienced by ordinary soldiers and the excesses of those in power... An impressive, even stunning debut'
Sunday Times

'An engaging and beautifully written novel, with an emotional resonance that remains long after you've closed the book. It succeeds in doing what only the best historical novels can do - making the past feel present --Independent A feat of high-wire empathy'

'A violent, elegant, unsentimental journey through hell and halfway back. This is an outstanding novel by a writer of huge talent and unusual candour.'

'The Undertaking is written with sympathy and skill. The narrative is tense and engaging, filled with complex undertones, impelled by an urgency and a deep involvement with the characters'.

'A bold and unsettling feat of empathy, all the more daring for its taut, beautifully understated style' 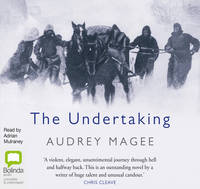