If you're a football fan and you're on Twitter, you probably follow @USASoccerGuy. His account is that rare thing - a genuinely funny Twitter account that has actually stayed funny, and he has a huge number of followers. His persona is that of an American soccer pundit with a very sketchy knowledge of the British game - live-tweeting along with matches on the telly, he talks in ridiculous ill-informed Americanisms and his best-loved catchphrases include 'GOALSHOT!', 'HAND DENIAL!' and 'COMPLETION WHISTLE!' . Particularly hilarious are his names for UK football teams (which he sells as T-shirts too) - including the Sunderland Red Stripers, Chelsea Blue Lions and Asstown Vanilla. In this exciting and important new volume, USA Soccer Guy brings you his unique take on the 25 most awesome moments in football history. Including Eric Cantona's classic kung fu kick in 1995, Maradona's Hand Felony of God in 1986 and David Beckham going to LA Galaxy, it's hilarious football fun for fans everywhere. 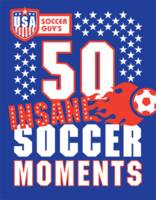 USA Soccer Guy is a Twitter phenomenon. He also writes a weekly column on the Ladbrokes website and is a regular contributor to the Daily Telegraph sports pages.