The First Bohemians Life and Art in London's Golden Age

This is the colourful, salacious and sumptuously illustrated story of Covent Garden - the creative heart of Georgian London - from Wolfson Prize-winning author Vic Gatrell. It is shortlisted for the hessell tiltman prize 2014. In the teeming, disordered, and sexually charged square half-mile centred on London's Covent Garden something extraordinary evolved in the eighteenth century. It was the world's first creative 'Bohemia'. The nation's most significant artists, actors, poets, novelists, and dramatists lived here. From Soho and Leicester Square across Covent Garden's Piazza to Drury Lane, and down from Long Acre to the Strand, they rubbed shoulders with rakes, prostitutes, market people, craftsmen, and shopkeepers. It was an often brutal world full of criminality, poverty and feuds, but also of high spirits, and an intimacy that was as culturally creative as any other in history. Virtually everything that we associate with Georgian culture was produced here.

An irresistible history, fizzing with life -- Philip Pullman Observer BOOKS OF THE YEAR

Gatrell's love for this dangerous but brilliant age is matched by his expert knowledge of its culture, both high and low -- Dan Jones Daily Telegraph HISTORIES OF THE YEAR

Compelling ... scholarly and bawdy -- Tristram Hunt Mail on Sunday BOOKS OF THE YEAR 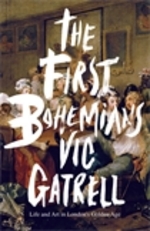 Vic Gatrell's last book, City of Laughter won both the Wolfson Prize for History and the PEN Hessell-Tiltman Prize; his The Hanging Tree won the Whitfield Prize of the Royal Historical Society. He is a Life Fellow of Caius College, Cambridge.