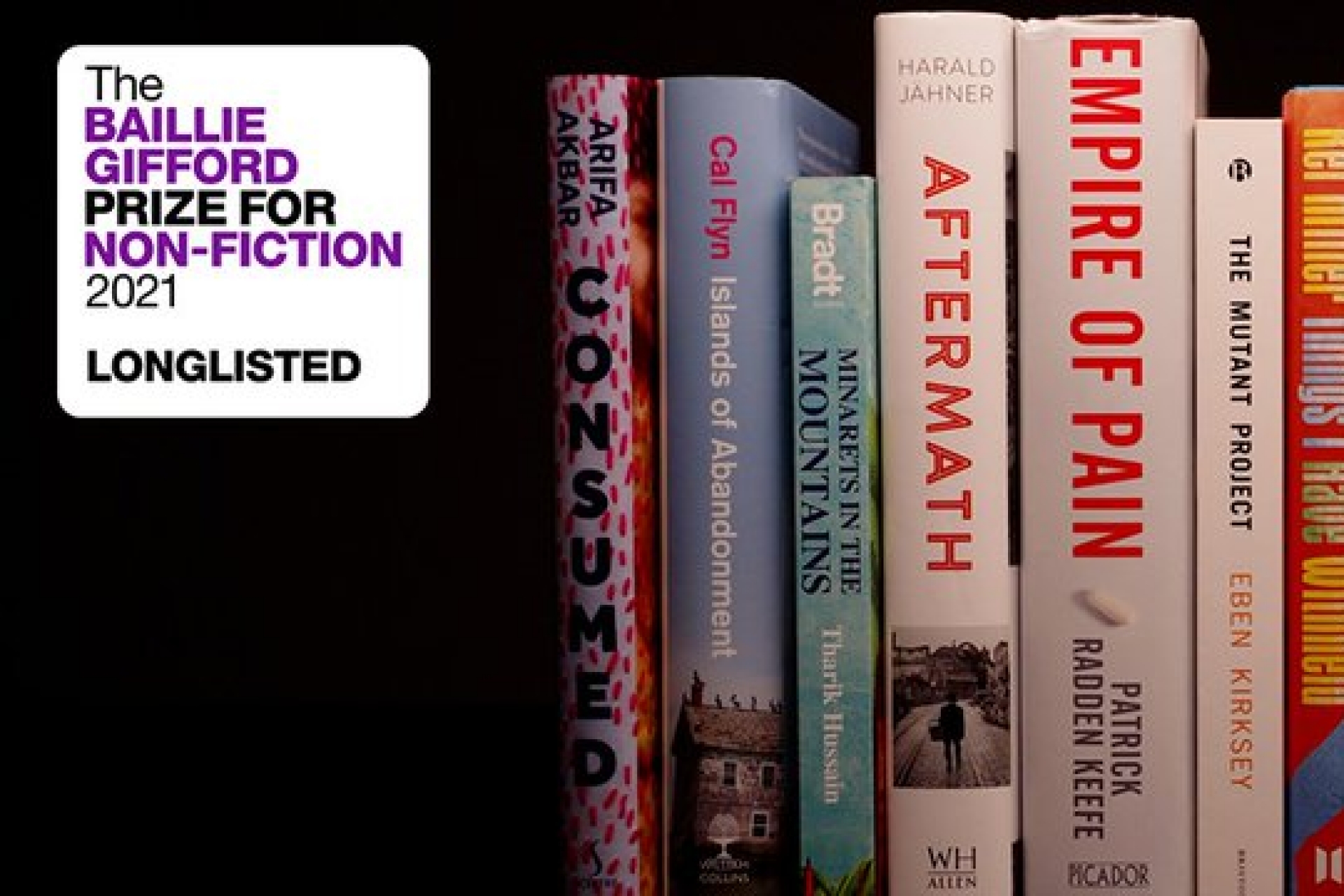 The Baillie Gifford Prize for Non-Fiction 2021 Longlist is announced

The Baillie Gifford Prize aims to reward the best of non-fiction and is open to authors of any nationality. It covers all non-fiction in the areas of current affairs, history, politics, science, sport, travel, biography, autobiography and the arts.

Sponsoring the prize continues Baillie Gifford’s long tradition of supporting literary and cultural events. “Our long-term commitment to the prize reflects our aim to make a real difference in the world of literature. This eminent award works perfectly with our other literary relationships and wider philanthropic programme which supports the arts, academia and local communities,” says Nick Thomas, Partner at Baillie Gifford.

This year’s longlist explores empire and its impact, personal stories, the environment and notorious historical figures and a range of international authors figure, including two books in translation.

The titles on this year’s longlist are:

Consumed: A Sister's Story by Arifa Akbar tells the story of Arifa’s sister and her battle with a serious illness exploring grief, loss, sisterhood and family.

Islands of Abandonment: Life in the Post-Human Landscape by Cal Flyn looks at what happens when nature is allowed to reclaim its place, through an examination of ghost towns and exclusion zones, no man’s land and post-industrial hinterlands.

Minarets in the Mountains: A Journey into Muslim Europe by Tharik Hussain is an eye-opening account that sheds light on a Europe often not acknowledged or understood. The first English travel narrative by a Muslim writer on this subject, Minarets in the Mountains takes us through regions where Islam has had in integral role shaping the places and culture of people.

Aftermath: Life in the Fallout of the Third Reich, 1945–1955 by Harald Jähner, translated by Shaun Whiteside is a revealing exploration of the lesser told yet incredibly important history of Germany in the first decade after World War II.

Empire of Pain: The Secret History of the Sackler Dynasty by Patrick Radden Keefe is a grand, devastating portrait of three generations of the Sackler family, famed for their philanthropy, whose fortune was built by Valium and whose reputation was destroyed by OxyContin.

The Mutant Project: Inside the Global Race to Genetically Modify Humans by Eben Kirksey takes us on a continent-hopping journey to meet the key scientists, lobbyists, and entrepreneurs who are bringing cutting-edge genetic engineering tools like CRISPR to their local clinics. The author ventures beyond the scientific echo chamber, talking to disabled scholars, doctors, hackers, chronically ill patients and activists who provide alternative visions of a genetically modified future for humanity.

Things I Have Withheld by Kei Miller is a collection of essays that examines the silence in which so many important things are kept. Miller powerfully and imaginatively recounts everyday acts of racism and prejudice and challenges us to interrogate what seems unsayable and why – our actions, defence mechanisms, imaginations and interactions – and those of the world around us.

Fall: The Mystery of Robert Maxwell by John Preston tells the gripping story the rise and fall of the infamous business tycoon Robert Maxwell.

Blood Legacy: Reckoning With a Family's Story of Slavery by Alex Renton addresses his family’s contribution to the transatlantic slave trade, through a compelling story of personal discovery, Renton considers how we can begin to make reparations for the past.

Empireland: How Imperialism Has Shaped Modern Britain by Sathnam Sanghera provides an insightful and frank revelation of the many ways modern Britain is rooted in its imperial past.

In Memory of Memory by Maria Stepanova translated by Sasha Dugdale tells the survival story of her seemingly ordinary Jewish family who somehow managed to resist a myriad persecutions and repressions of the last century.

Burning Man: The Ascent of DH Lawrence by Frances Wilson follows the life of DH Lawrence from the peninsular underworld of Cornwall in 1915 to post-war Italy to the mountains of New Mexico, and traces the author's footsteps through the pages of his lesser known work.

Free: Coming of Age at the End of History by Lea Ypi tells the coming of age story of Lea Ypi during Albania’s turbulent political upheaval after the fall of the Berlin Wall. Societal changes and personal revelations lead Lea to challenge our beliefs about ideals and reality, hopes and fears, and what freedom really means.

“We have worked incredibly hard as a group of judges on this longlist, and ranged a long way out of our boundaries to ensure we picked up promising books that might not otherwise have been considered. I think and hope that the results of that speak for themselves - a list full of rigour, endeavour, variety and real verve, open to a broad readership, with some terrific surprises, and an onus on originality. I can’t thank my fellow judges enough for their generosity, commitment and cohesiveness, and I can’t wait for the shortlist now.”

The shortlist for the 2021 award will be announced on Friday 15 October, live from the Cheltenham Literature Festival.

The winner of the 2021 Baillie Gifford Prize for Non-Fiction will be announced at an event at the Science Museum, generously supported by the Blavatnik Family Foundation, on Tuesday 16 November.

Last year’s winner was Craig Brown for One, Two, Three, Four: The Beatles in Time, which in paperback went on to become a Waterstones Book of the Month.