Maxim Jakubowski is for me, a book world great. Not only is he an author, he has also worked in senior positions in publishing, owned the Murder One bookstore, and been crime reviewer for Time Out and the Guardian. He is currently the Chair of the Crime Writers' Association John Creasey New Blood Dagger Award and has very kindly agreed to be a judge for our Lovereading Very Short Story Competition. I have to say that I have quite fallen in love with his book shelf picture, and I’m still in awe at how many books must reside in his house, just think of all of those words whispering to each other!

Tell us about your role in the book world

Somehow over the years, if it's to do with a book I've been involved: first book published at the age of 16; first review (arguing that we'd never hear of Kurt Vonnegut ever again following his first novel which I hated/rather misunderstood at such a young age...) also published at 16; 20 years in the publishing industry as an editor and executive, followed by 20 years owning a bookstore; in parallel 18 years of reviewing crime for, in succession, Time Out London, the Guardian, LoveReading and right now Crime Time; for 12 years co-director of Shots on the Page, London's Mystery Film and Lit festival; and throughout all those years writing and editing books, and punditing about them on radio and TV and at literary conferences. Also translate the odd French novel and am right now the Vice Chair of the Crime Writers' Association and Chair its First Novel Dagger panel of judges.

How did you arrive in the industry?

I always wanted to be an editor and banged on doors unsuccessfully until I managed to convince Richard Branson to finance a book publishing outfit, Virgin Books which I started from scratch and ran for several years before moving on to more mainstream companies.

What three words best sum up your job?

Which fictional character or person from history would you love to read a book by (why is that?) and what type of book do you think it would be?

Jay Gatsby and it would be about love, life, sadness and beauty.

Who are your book world inspirations?

Describe your favourite place to read?

In bed in my cabin on a cruise ship.

What’s your favourite book from childhood, how did it make you feel?

Anything by Jules Verne, who showed me that there is no limit to the imagination, and H.Rider Haggard's SHE, which introduced me to the profound mystery and beauty of women.

Any format on a printed page.

Book Shelfie: could you take a picture of your favourite book shelf please and tell us what it is about this particular shelf that you love. 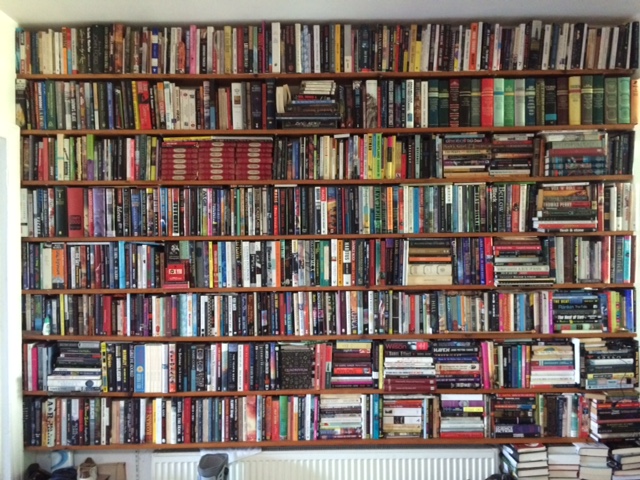 Just one of many identical sets of shelves (at a rough guess over 400 of them) socan't really claim  it as my favourite. I live in a house with 11 rooms, each of which has books going from floor to ceiling and an attic where they are piled man-high! And then there are also two buildings at the back of the garden for the overflow! Modesty forbids me to show the few shelves that house my own books!

None than I can reveal in public.

I own a John Le Carre rarity, of which only 3 copies exist worldwide after the run was pulped, and even managed to get him to sign it unawares, taking advantage of the fact that my daughter was friends with one of his sons.

Click here to read more of our Industry Insights.