The Desmond Elliott Prize 2019: The Longlist

You can keep up to date with The Desmond Elliott Prize 2019 by visiting our Awards Page. 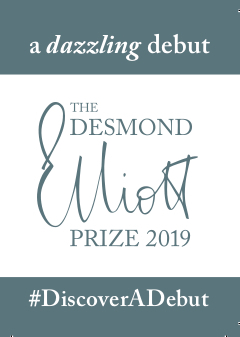 The 10-strong longlist for the 12th annual Desmond Elliott Prize, the “UK’s most prestigious award for debut novelists” (Daily Telegraph), has been revealed (Tuesday 2nd April). The Prize, which is presented in the name of the late, acclaimed literary agent and publisher Desmond Elliott, has revealed a longlist that stretches from magical realism to rigorously researched historical novels and whose authors range from playwrights to political activists.

Several of the longlisted authors looked to their own family histories for inspiration. In A Perfect Explanation, Eleanor Anstruther tells the shocking story behind her aristocratic grandmother’s selling of her son (the author’s father) for £500, while Testament was inspired by Kim Sherwood’s grandmother’s experiences as a Holocaust survivor. Anna Mackmin’s Devoured is influenced by the award-winning theatre director’s own childhood spent in a hippy commune in Norfolk. Stubborn Archivist by Yara Rodrigues Fowler, who co-created the GE2017 Tinder chat bot to campaign for Labour in the 2017 General Election, examines cultural duality as experienced by the author in her own Brazilian-English household.

Magical realism and the fantastical loom large this year, with The Chameleon by Samuel Fisher, Follow Me to Ground by Sue Rainsford and Everything Under by Daisy Johnson – the youngest ever Man Booker Prize shortlistee – all making the longlist. Elsewhere, Golden Child by Claire Adam, published in the US by Sarah Jessica Parker’s SJP for Hogarth imprint, Hold by Michael Donkor and Future Popes of Ireland by Darragh Martin explore the great themes of love, belief and abandonment within the frame of three uniquely troubled families.

Independent publisher Salt and HarperCollins imprint 4th Estate each have two titles on the list, which sees independents take on the big publishing houses. The longlisted authors include two Observer ‘new faces of fiction’: Michael Donkor and Yara Rodrigues Fowler, who were featured in 2018 and 2019 respectively.

The Chairman of the Prize’s trustees, Dallas Manderson, said: “It is with great pride that we once again present a list that combines dazzling debuts which have already caught the attention of the literary world with a number of titles that have so far flown a little under the radar – undeservedly so. It is our hope that being longlisted for the Desmond Elliott Prize will help these promising authors receive greater recognition from the media, trade and book-buying public. Our 2018 winner, Preti Taneja, has already achieved wonderful things in the nine months since her win and we wish all the same success to this year’s hopefuls.”

This year’s chair of judges, Man Booker Prize-winning author Alan Hollinghurst, said: “I’m really delighted to have been asked to chair the judging panel for the 2019 Desmond Elliott Prize. It’s a prize that rewards the courage as well as the skill of new writers — the ones who will go on to shape the reading landscape of the future.”

The Desmond Elliott Prize has a track record of spotting exceptionally talented novelists at the very beginning of their careers. Last year, the Prize was awarded to Preti Taneja for her debut novel, We That Are Young. Since winning the Desmond Elliott Prize, We That Are Young has been published in the US, Canada, India, Germany and France. Other past-winners include Francis Spufford, Claire Fuller and Eimear McBride.

Alan Hollinghurst is joined on the judging panel by the literary editor of The Times, Robbie Millen, and chief executive of the Booksellers Association, Meryl Halls. A shortlist will be announced on 10th May and the winner will be revealed at a ceremony at Fortnum & Mason on 19th June, where they will be presented with a cheque for £10,000.

This is a Press Release. You can keep up to date with The Desmond Elliott Prize 2019 on our Awards Page.

For any further information about this press release and The Desmond Elliot Prize, contact Caitlin Allen at Riot Communications on: 020 3174 0118 / caitlin@riotcommunications.com